Geek Maggot Bingo or The Freak from Suckweasel Mountain (1983) 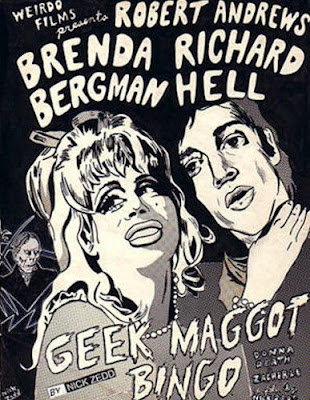 You'll rule the day you spurned my ejaculation!

Nick Zedd and the Cinema of the Transgression movement was one I learnt about at a younger age. It is an area of cinema which feels aptly in bootleg or VHS rip, despite needing to be properly resurrected, befitting a raw nerve of cinema meant to shock and outside of traditional confines. Zedd, who passed in February 2022, in films like I Eat Scum (1979) and War is Menstrual Envy (1992) felt nihilistic, grimy and explicitly no wave, which makes the day I finally was able to see Geek Maggot Bingo more surprising, as in the midst of this era of Lydia Lunch, Beth B and Richard Kern, Zedd of all people makes a lurid punk interpretation of old b-movie monster movies, like the No Wave version of Al Adamson's Dracula Vs. Frankenstein (1971) in premise. The combination of both sides is emphasised by the bookends of John Zacherle, the cult television horror host I know more for voicing Aylmer in Frank Henenlotter's Brain Damage (1988), and doing a damn good job at it, as he is here whilst yet being caught shooting up with a syringe onscreen when introduced, before he himself introduces this lurid b-flick. This sets up the curious nature of a transgressive film meant to be tasteless, but happily embracing these b- and even c-flick horror tropes, clearly loved as well as seeing their potential for being disruptive and transgressive.

The comparison to Adamson's Dracula Vs. Frankenstein, a notorious monster film defined as many as being the bottom of the barrel, is appropriate, whilst a different plot to the Nick Zedd production, of Frankenstein's monster meeting vampires, Geek Maggot Bingo itself when Universal Horror movies are smashed together with punk aesthetics. Dr. Frankenberry, played by Robert Andrews, a one-time performer who steals the film with his over-the-top line readings, is expelled from the scientific community for trying to resurrect the dead. Considering he wished to experiment with human bodies, but was only allowed to have resurrected a kitten, a cute one which looks like it has sharpie pen marks on its form, being kicked out as a mad man might have been beneficial. Without shackles, and acquiring a hunchback assistant named Geeko (Bruno Zeus), happy to cross dress as a female sex worker to acquire fresher corpses, he is at an advantage. Frankenberry's only concern now is that a female vampire named Scumbalina, played by Donna Death, the other MVP as, despite having no speaking lines, she spoke through the film's production - co-composing the hand painted set designs and costumes with Nick Zedd, drew the opening portraits of the cast, did production management among other roles, even provided the catering all whilst playing the part of a sensual goth vampire.

Desiring to turn Frankenberry's daughter Buffy into her minion in a ritual, played by Brenda Bergman, a very distinct figure just from her voice and line delivery, this feels entirely sincere as a lurid no budget take on a Hollywood or poverty row monster film. Frankenberry's only solution to stop this being his Frankenstein creature with two heads and formaldehyde blood, even if it means sacrificing an alcoholic cowboy played by legendary punk musician Richard Hell for the required life-force. Even if Hell cannot be put down, he is still useful when Frankenberry's daughter is in the vampires' clutches...even if here bullets go through vampire and hit bystanders by accidental lack of awareness of this. 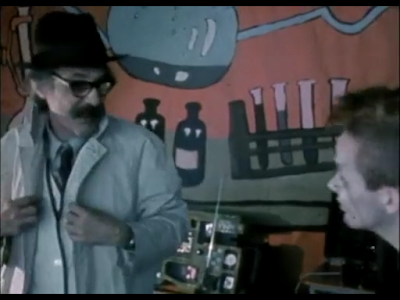 Case in point, there is a very explicit sex scene and it feels less like sticking a middle finger up at the old films' morality, but a John Waters moment, which with Brenda Bergman bouncing on her male co-star like a space hopper is not actual pornography as, nude as an Andy Warhol/Paul Morrissey film, the co-actor clearly does not have an erection underneath. The hunchback Geeko being seen dressed as a woman, taking out an unfortunate male client with an axe, or Frankenberry when annoyed liable to just swear at someone with perfect curtness, is material entirely from Geek Maggot Bingo, it's crassness yet not the weirdness of I Eat Scum (which is a surreal string of events including a brothel for dogs) or War is Menstrual Envy (which has real eyeball surgery over its end credits), but a monster film reinterpreted sincerely by a group of punks.

Even the added gore is not a nihilistic subversion of these films but transgressive by being gross, playful and over-the-top, including there being a multiple legged and two headed Frankenstein who looks like a background extra of Alex Winter's Freaked (1993) and is able to crush heads like grapes. One victim getting his facial features rearranged like a Mr. Potatohead even feels like Screamin' Mad George creation before he ever got into cinema in the late eighties, with makeup effects provided between Ed French, Tyler Smith and Tom Lauten, Lauten going from The Toxic Avenger (1984) to King Kong (2005) from this work very early in his career in a variety of roles. Like another likely influence, the splatter films innovated by Herschell Gordon Lewis, it is bad taste and shock for fun. The handmade quality is upfront - Donna Death and Nick Zedd's painted backdrops, the improvised sets in rooms, have a contained artificiality which is close to the original horror films, constructed on Los Angeles Hollywood sets, only lower budget and erected in New York. The sense of hard work, embracing the dirtiness of the DIY aesthetic, is befitting, making sense of a Cinema of Trangression film too for deciding to go for the low art Monogram Pictures/Al Adamson/regional splatter quickie/Ed Wood Jr. mishmash we have here, the kind shown on TVs and found in grind houses only with the production bringing their own style to it. It feels charming, which is weird for a film where Frankenberry gets impaled on a tree among other gruesome content, but even in his demise he quotes of the spectacle of death, and the last thing I expected was a Nick Zedd film was a happy ending with a couple walking off in peace. Not from the director of I Eat Scum of all people, and certainly not from the same film movement with Richard Kern's more BDSM voyeuristic shorts, even if the film we have is still weird and snotty.

The only sense of irony is from Zacherle playing this as a snooze fest he is introducing, with his special "droll cup", a plastic one attached to his mouth on cord, the one ironic nod to itself. Geek Maggot Bingo beyond this is a b-movie, a weirdo genre film made too playful, too properly done even as a low budget genre film, to have the joke at its own expense land. Everyone just decided in this production to make a monster film with tasteless moments, but also leaning into the clichés and arch dialogue fully, proudly. It feels a charming surprise from the least likely of places, but clearly even Nick Zedd wanted to have fun here. 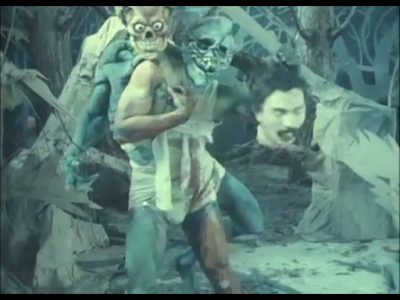 Newer Post Older Post Home
Subscribe to: Post Comments (Atom)
"I could go on for hours with more examples. The list is endless. You probably never gave it a thought, but all great films, without exception, contain an important element of no reason. And you know why? Because life itself is filled with no reason." - Rubber (2010)